The 2020 EOS/ESD Symposium in September 2020 featured a new EMC Special Session, held on the Wednesday of the Symposium, organized in cooperation between the EMC Society and EOS/ESD Association, and featuring EMC Society leaders as well as presentations/presenters from the recently held 2020 EMC Symposium.

This Special Session was planned to emphasize relationship between EMI/EMC and ESD (how EMI and ESD can be used together, what aspects of EMI can be considered in EMC solutions, and how the different EMI-related tests relate to ESD. This session featured a set of papers, short tutorials, and an interactive expert panel discussion, providing a platform to encourage participation with the intent to continue this in the future.

These papers covered topics from investigation for improvements for the IEC 61000-4-2 standard, triboelectrification effects on spacecraft, robotic scanning to study ESD induced soft failures, and soft failures generated from system transient testing. There were also five invited tutorials covering both the IEC test methods and evaluations and EMI measurements.

Papers [1]-[4] from the EMC Symposium were re-presented at the Special Session.

A first paper [1], “ESD Generator Tip Current Reconstruction Using a Current Probe Measurement at the Ground Strap,” was presented by Shubhankar Marathe from the Missouri University of Science and Technology. It gave insight into how monitoring ESD generator discharge current during IEC 61000- 4-2 testing helps to better understand product failures. Acquiring the discharge waveform using an oscilloscope enables the operator to both document the current waveform that resulted in product failure and identify the presence of a secondary ESD event within the product. There are issues with acquiring this waveform reliably. For example, placing a current probe such as an F-65 current clamp at the tip of the ESD generator may change the discharge current waveform shape due to probe loading. In addition, the inclusion of an extra cable and current clamp increases physical weight at the tip of the ESD generator and reduces operator convenience during testing. To overcome the probe loading effect, a non-intrusive measurement method of positioning the F-65 current clamp at the ESD generator ground strap was first proposed. However, the configuration resulted in the captured waveform not including the initial high-frequency peak current directly. Therefore, mathematical processing was needed to reconstruct the initial ns-wide high-frequency current waveform which often leads to product failure. The goal of this work was to reconstruct the high-frequency discharge tip current waveform by measuring the current on the ground strap and applying deconvolution. The deconvolution method was first validated using circuit simulation. Second, measurements were performed with different ESD generators to determine the effectiveness of the reconstruction algorithm.

The second paper [2], “ESD Analysis and Evaluation of Typical Spacecraft Survival Suit Umbilical Tubing,” was presented by Robert C. Scully from the Jet Propulsion Laboratory. He presented an assessment of the potential for the occurrence of triboelectrification effects resulting from gas and fluid flow through umbilical tubing attached to a typical spacecraft survival suit. The ESD assessment demonstrated that gas and fluid flowing through the umbilical tubing posed no threat to crew safety over expected operational time periods up to 150 hours.

The third paper [3], “Investigation of Electrostatic Discharge-Induced Soft-Failure Using 3D Robotic Scanning”, was presented by Omid Hoseini Izadi from the Missouri University of Science and Technology. It discussed the development of a robotic ESD scanning system used for System ESD scanning of complex 3D objects. The system was shown to provide pseudo-2D plots that illustrated the ESD-sensitive locations of the device under test on a relative scale. It was observed using this system that disturbing different sensitive regions led to different soft-failure types. For example, determining the sensitive locations of a complex-shaped DUT helped to identify the disturbed circuitry and verify the effect of countermeasures in a repeatable way.

The fourth paper [4], “Experimental Validation of an Integrated Circuit Transient Electromagnetic Event Sensor,” was presented by Shubhankar Marathe. It discussed the challenge of determining the components or coupling path within a system responsible for soft failures during system transient testing. This challenge is in part because components are hidden deep within the product and measuring those internal voltages or currents during a transient test may not be practical. Also, adding cables to the system to make voltage or current measurements can be difficult and may alter the test results. To overcome this problem, a compact sensor was designed to measure the peak over- or undervoltage on a trace or pin during a transient electromagnetic event. The sensor was designed to wirelessly transmit the peak level of the event to a receiver outside the device under test using frequency-modulated electric and magnetic fields so that no cabling or other changes to the system were needed. A proof-of-concept of the sensor was implemented in an integrated circuit (IC) using 180 nm technology which measured the peak level of a negative transient event. The sensor operation was validated by direct injection to the sensor from a transmission line pulser. The sensor was also used to detect the peak voltage on a USB cable during a transient event on the cable-connected system. Tests showed that the sensor successfully detected and transmitted the peak level of the event and that the oscillation frequency (and thus the level) could be easily detected by a near-field probe placed outside the enclosure of the device under test. 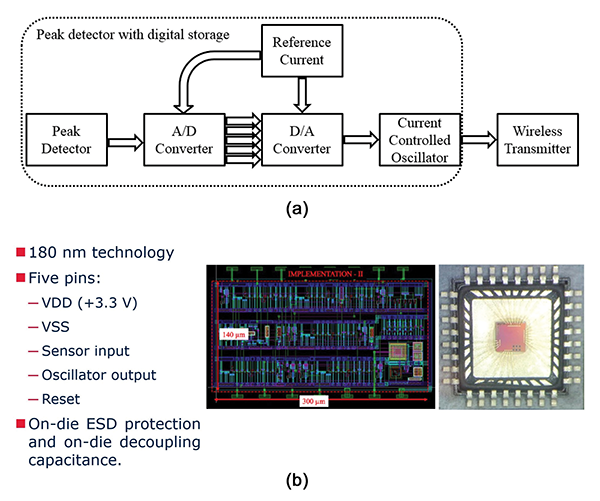 The first tutorial, given by Ross Carlton, ” gave an overview of IEC 61000-4-2. IEC 61000-4-2 is the most used System-Level ESD test method standard since it is used for most consumer, commercial, and industrial products. This presentation discussed the specified ESD waveform, test setup, test methodology, and reporting requirements. The application of this method for testing PCBs, IC package pins, and other unusual applications was discussed. This tutorial set the stage for several of the following tutorials.

The second tutorial, “System-Level ESD Design Considerations and a Means of Evaluation” was given by Colin Brench. This workshop discussed the impact of ESD events on the behavior of high data rate interfaces and how such events impact not only hardware design but also the firmware and software. Simple pass/fail tests give little indication of true performance, but when delivered under slightly different operating conditions, a deeper understanding is possible. Details of the improved test methodology were described and included an example of the process and results from a particular case.

The third tutorial, “Lessons-Learned in System-Level ESD Testing was presented by Derek Walton, SSC Labs, Harry Reid Engineering Laboratory, University of Nevada-Reno. The methodology specified for EMC testing is complex and contains many uncertainties that can impact the test results. This presentation addressed these complexities and the lessons learned from years of testing a wide variety of products. Specific issues with how to properly set up and conduct the IEC 61000-4-2 test were presented and discussed.

The fourth tutorial, “System-Level ESD Failure Mechanisms and Mitigation Techniques” was presented by David Pommerenke, Graz University of Technology, Graz, Austria. With the premise being system-level ESD often leads to soft-errors (e.g., bit-errors, wrong resets, etc.) and even damage, this presentation offered guidance on finding the root cause of upsets frequently observed in immunity testing (e.g., ESD, EFT) and described various measurement techniques. Further, it was shown how measurements, revealing local sensitivities, can be used for the characterization and optimization of circuits and software.

The final tutorial, “EMI Measurements in Manufacturing Environment”, given by Vladimir Kraz from OnFilter, provided practical guidance on measuring and quantifying relevant EOS-causing EMI signals in a semiconductor or electronic manufacturing environment. The basic methodology, required tools, and the difference between correct and incorrect approaches was presented, involving measurements of EMI voltage and current. This tutorial provided practical support to a recently released Technical Report TR23.0-01 on EOS [5] that contains a significant section on EMI as a source of EOS. Measurements of EMI are quite different from those of ESD to which many members of EOS/ESD Association are accustomed. This tutorial “demystifies” measurements of high-frequency signals essential to managing EMI-caused EOS in any process.

The final portion of the session was an interactive virtual “Expert Panel” led by the above presenters and organizers. This panel was very informative and featured many questions from the audience on EMC aspects of ESD and vice versa, referring to the presentations during the session.