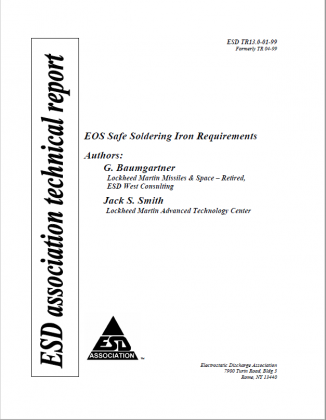 Soldering iron requirements to prevent electrical overstress (EOS) vary throughout the world. EOS issues related to soldering irons have not been researched based on device physics or sound electrical engineering practice. In the United States the most prominent standard has been the MIL STD-2000 series documents that contain soldering specifications. (MIL STD-2000 is now cancelled without replacement as the Military is using civilian documents.) ESD documents often consider the soldering iron requirements part of electrostatic discharge (ESD) protection, but the soldering iron requirements are really intended to control one of the many forms of EOS, not ESD. An underlying, but misguided concern is the possibility of causing a latent defect that would become a latent failure. This issue has been addressed and it has been shown that a latent failure is highly improbable, therefore latency is not an issue, even with a faulty soldering iron.

All electronic documents must be delivered directly to the intended person for use on only one computer. The document may not be forwarded to any additional users or accessed on multiple computers. Electronic documents will be emailed within 48 business hours.